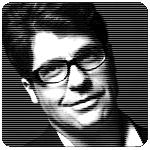 An inventor of surprising ideas and fussily precise wordsmith, Steven Bochenek is for hire by the hour, project or contract. Browse any of the three separate portfolios here: marketing, automotive journalism and other journalism. Or ask if you can’t find what you want. You can download his résumé (that’s curriculum vitae in English) too.

Steven’s been writing professionally since 1989 and worked in marketing agencies until 2004. Among the highlights? VP Creative Director of Lowe RMP during both years it won Strategy Magazine’s Direct & Interactive Agency of the Year. Chief Creative Officer of OgilvyOne Canada which included a conference with other big-office CDs at Madame Ogilvy’s chateau in the Loire Valley. For an ad person, that’s like a trip to Mecca — but with booze.

He’s run his own successful small business for over a decade. He can assemble a complete team around any job lickety-split, or just offer humble copywriting services. His work has won scores of awards, including the Canadian Automotive Journalist of the Year, runner up in 2014. Steve’s still primarily writing advertising but broadened into journalism and in 2011 became an accredited member of the Automobile Journalists Association of Canada. Scratching the creative director’s itch, he’s taught copywriting part-time for eight of those years at Humber and Centennial Colleges. His interests include playing the piano, traveling and writing about himself in the 3rd person. Here’s his résumé.

Vice President, Creative Director, Lowe RMP, June 1998 – March 2003; began as Senior Writer and was promoted twice; co-grew the agency from 5 staff to over 50 in 5 years

09/2014 — 2018. Royal Roads University Master of Arts in Interdisciplinary Studies (MAIS) specializing in Education and Advertising; thesis was the design and deep review of and reflection upon an online course in advertising copywriting